Art Show Outcomes....how did I do?

It has been an exciting couple of weeks!  My parents came to visit, which, in itself, is full of  busy preparation, commotion, etc., but they came while I had trips to make, to attend two separate art receptions up in the Dallas area.  As it turned out, it was AWESOME that they could be here for those events!

Let's talk about Irving!  On May 20th, we attended the reception and awards ceremony for the 'Texas & Neighbors" 33rd Annual Region Art Exhibit.  We had time to kill before the event started, but it was just long enough for us to make a circle around the Las Colinas Mustang sculptures, which were only a mile or two away. 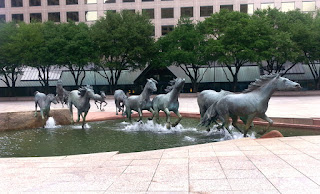 The Irving Art Center is a lovely venue, and as always, this harpist made the affair so much more beautiful with his playing. 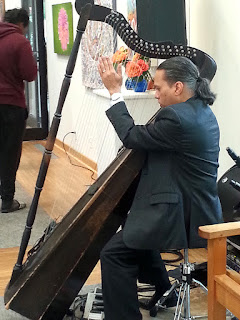 So.... (drumroll, please)...I won 3rd place in the Mixed Media category!  Yay!  If my math is correct, the winners from this show can be proud to be among the top three or four percent of ALL entries into this juried exhibit.  With just under 700 entries this year, they chose 70 to be included in the exhibit.  That's about ten percent of the entries.  Then about a third of those in the show received an award (1st, 2nd, 3rd & honorable mention in several categories, plus two special top awards).  So... my math may or may not be accurate, since I'm rounding off my numbers some, but it should be close.  Even just being in the show at ALL makes you a winner.

In addition to receiving a $300 prize, I was also flattered to have a local florist, The Chocolate Rose, choose my piece, among several others, to serve as inspiration for an innovative floral creation. 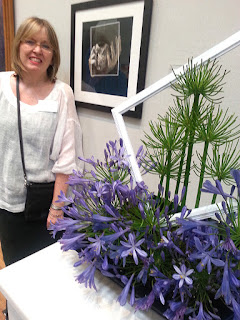 In case  you missed my previous post, here's a better image of the artwork I titled "Enduring the Countdown". 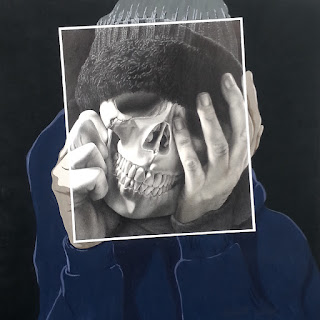 My friend Gwen showed up at the reception, and was so kind to block out her Dallas Air BNB for us for the night. My folks and I enjoyed a relaxing night in her funky space, without having to drive ten hours (up and back home again) in one day!  One of the rooms in her ecclectic apartment housed a massage chair, an acrylic chair, and coffee station, and there was a black light bulb illuminating it all, causing a very fun effect on her acrylic chair.  It was more or less a quirky night light, and I was somewhat mesmerized by it. 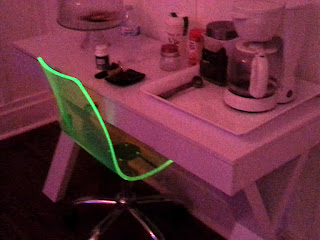 So NOW... let me take  you back in time.... to the previous weekend.  I am retelling these events in reverse order, so as not to be anticlimactic.  On May 13th, we attended the awards reception for the Richardson Civic Art Society's Annual Juried Regional Art Exhibit.

We got to town early, ate at one of my favorite places, Eatzi's, and, once AGAIN, had time to kill before heading to the Eisemann Center for the art shindig.  We are 'early people'.  We don't like arriving late for anything.  We'd much rather have extra time on our hands than make excuses why we were late.  I thought my dad would enjoy sitting and watching planes land onto Love Field, so we parked under shade trees on the south side of Bachman Lake and watched the activity for about an hour.  It was a nice respite from the big city traffic! 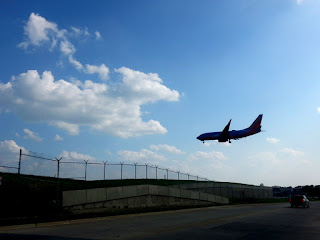 The Eisemann Center in Richardson, Texas is such a pretty space.  I have exhibited artwork in this particular show before, and yet I always get giddy when I'm included in an event here. 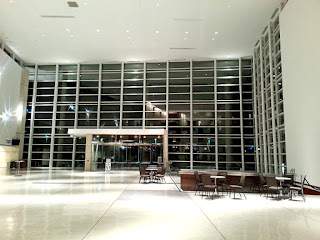 And now.... drumroll, please...   Wait, we already did a drumroll earlier.  Okay, then, how about if we get a much bigger drum?

I WON BEST OF SHOW!!!  I could NOT believe it!  When they handed out all the awards in my category, I went from nervous, and worried, to wondering what went wrong.  LOL!  They had actually told me I should attend the ceremony, because I'd won something.  But I had no idea what, so I thought maybe they had called me in error.  And then after every category was awarded, they had two prizes left.  The $500 juror's choice award, and the $1500 Best of Show Purchase Award.  And I got the Purchase Award.  WOOHOO!!! 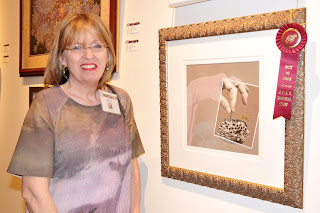 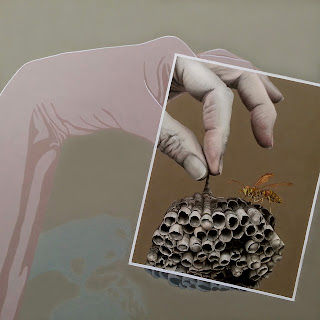 My parents were such troopers, and even though this was a late event, concluding at 9 p.m., this time we DID have to finish driving the second half of the 10-hour round trip.  But it was a perfect way to spend Mother's Day, and we were all floating on an adrenaline cloud! 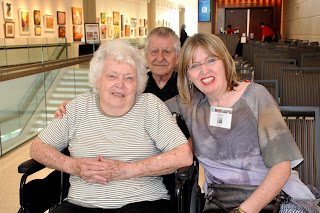 They hung in there for the duration, but they were certainly ready to hit the road.  I wanted to milk it for all I could, and really didn't want to leave.  On the way out, I even stood for awhile and stared up at the exhibit from the lower level. 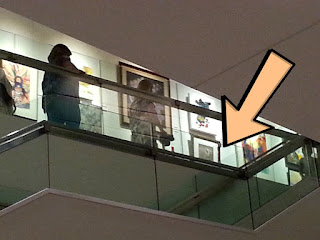 So, it's been a busy couple of weeks, and now I must dive into another project.  I will fail to meet my very next art goal, having too much going on lately to work on my drawing at ALL.  That deadline will have to come and go without me.  But I'm not unhappy about it.  I just have to dust off the ol' pencils and get back to work, now that things are getting back to normal.  I find that it helps me to have a goal in mind, or an exhibit location to imagine, while I'm working.  So I'll find another deadline to light a fire under me, no worries.