I never started this blog with the intention of being on display, or even considering there was a listener.  I use the second person reference the same way you would with a diary, calling the journal pages 'you'.  So when I tell YOU a story, I don't see YOU as real people.  That's partly why I don't blog very often.  I don't imagine any kind of audience out there.  I suppose I could attempt to develop a bigger following, but in all honesty, that really just seems like too much work, and not why I document my creations.  So, if you're a real person, and you've accidentally landed on this blog and like any of my projects, artwork, recipes, or whatever, I hope I haven't offended you or belittled your presence here.  I appreciate you.  I hope you can find inspiration in my sparse pages, and thank you for visiting.  There... if I were an actor, I feel I'd have just broken the fourth wall!  Now, back to the solitude of me and my journal.  It's been a few months.  So.... Dear Diary...  How have ya been?  What have I been up to, you ask?  Well....

Remember the artwork I entered in a competition last spring?  It was the one I titled 'Diane and Playboy' that I introduced in my last blog post.  It was accepted in the 49th Annual Regional Juried Art Exhibit in Richardson, Texas.  The show was judged by artist Gladys Roldan de Moras, and the event's reception was held in the beautiful Charles M. Eisemann Center in May.  I attended the reception and was in awe of the space.  I think this is the most impressive venue I've ever had the pleasure of exhibiting in! 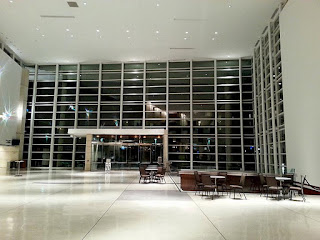 It turns out that I won third place in the Pastel and Graphics category, which covers all drawing media, as well as printmaking techniques.  That's a rather inclusive category, and the competition was all very top tier!  In this photo, my artwork is the one in the middle, on top... hand on horse's face... kinda small... sorry. 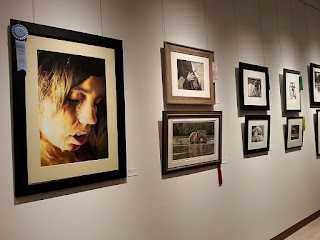 Additionally, I had entered work in the 30th Annual Texas and Neighbors Regional Art Exhibit, sponsored by the Irving Art Association (Irving, TX).  Artists were eligible to enter this show if they lived in Texas or any of the four states that border Texas.  Out of the three pieces I entered, juror Leeann Stone chose this mixed media piece titled 'Rapunzel Had a Better Idea', which was composed of predominantly graphite pencil, but also included watercolor, ink, marker, highlighter, conte and acrylic. 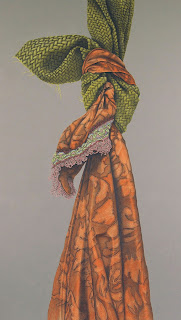 I attended that reception as well, and was so surprised when my work received first place in its category!  They even displayed a flower arrangement nearby which took inspiration from my art.  How cool is that? 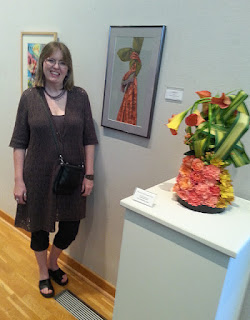 So, back to the drawing board I went, and a couple weeks ago, I finished this piece, titled 'Blazer's Pedicure'.  It's also a mixed media piece, combining graphite with watercolor, ink and marker, and with a small amount of conte and colored pencil. 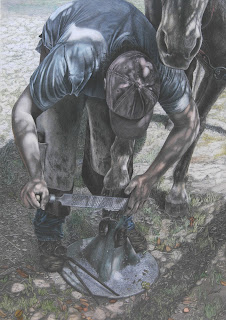 And now I'm on to the next work, which is actually something I started months ago and set it aside.  I wasn't sure what direction to take it, and now I've decided it needs a basket in the background, rendered slightly out of focus, so as to give more credibility to the realistic nature of the parts IN focus.  But so far, this is all the farther I've gotten, and while this is a close-up detail, the overall panel still has a lot of blank space on it! 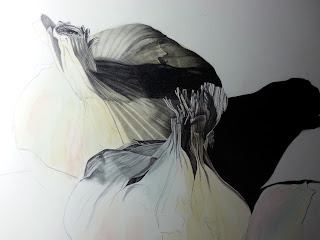