I wish I could say I've been creative lately, but instead, I've been doing hard labor! It's been a lot of careful measuring and precision cutting of 2x4s. I tore out most of a wall in my bedroom that separates it from the bathroom and closet. It wasn't a load bearing wall, so I had no worries of collapsing the house. It all started with a mattress! Yep, that's right. We got rid of our old queen sized mattress and purchased a California-King sized Tempur-Pedic mattress. It didn't fit in our bedroom as well, so it was necessary to change some other things around. We have been wanting to make some improvements in this room for awhile now, and since I had already planned on replacing drywall, I figured that we could swap out the swinging/hinged door to the bathroom and install a pocket door while we have the wall opened up. That should free up about 10 square feet of space, the amount of arc that a regular door needs to open completely. 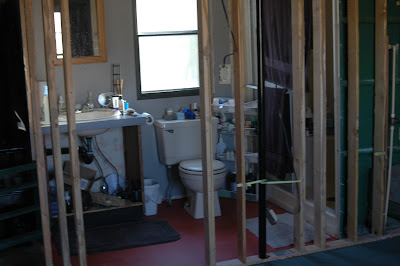 First, I removed the old sheetrock, which had a lot of flaws and irregularities. Then I found that many of the studs were not in the right places. No wonder the previous drywall installers didn't hit the studs half the time! I have now removed all the unwanted studs, added more (correctly, on 16" center, and plumb, I might add), then fitted the pocket door in place. 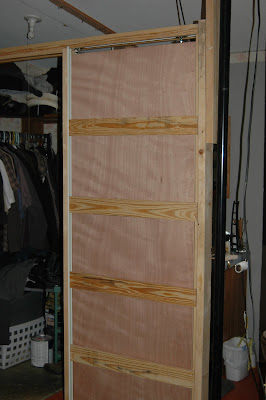 This is what the pocket door looks like before the drywall covers the framework. And as you can see, I have jumped the gun a little and mounted the door before staining it. I just wanted to make sure it was going to install right.

So there's lots of hard work left to do. My reward, after this wall is finished, is to texure another wall of this same bedroom. But I have to complete this wall first, so I'll be updating as it happens. I like starting a project that is messed up and ugly to begin with, because the before and after difference is extreme, making me look like a genious! When I get to move on to the interesting textured wall, I'll be using a tissue paper technique, rich brown paint, and glaze highlights. I've never done a process like this before, but I'm thinking it will be a whole lot more fun. That's the kind of project that doesn't feel like work!

Have you purchased truffles lately? Not the chocolate kind, but the edible subterranean fungus. Truffles are neck and neck with the price of silver, which today, just happens to have dropped to $28 per ounce after having recently hit $30. 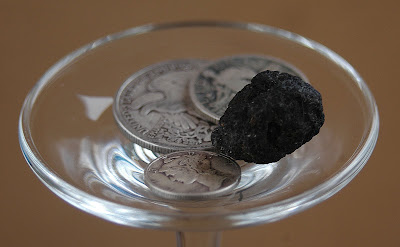 So, as you can imagine, this ingredient isn't one to be taken lightly or squandered in any way. I have eaten truffles in egg dishes and on pasta, but my favorite use of the truffle is to incorporate it with brie cheese in a pastry. Calling what I'm about to share a 'recipe' is an overstatement. All you really need are guidelines to create your own impressive appetizer. 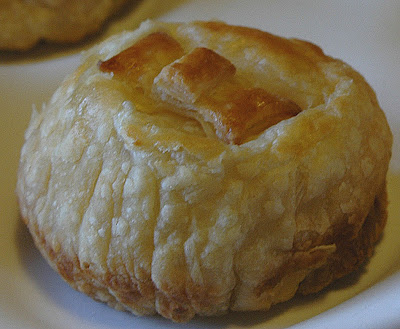 The short version is: slice a brie round horizontally in half, spread your choice of filling, replace top, wrap in thawed puff pasty, bake. Nothing to it. I chose to use truffles in my filling, but the beauty of this is that you can insert whatever ingredients you like. Typically, you would use one or two large brie rounds. However, I found some personal sized, mini brie rounds and thought they would be easier to share at a party.

For the filling, carmelize about half a small onion, minced, in a tablespoon of unsalted butter. Let it drain on a paper towel. 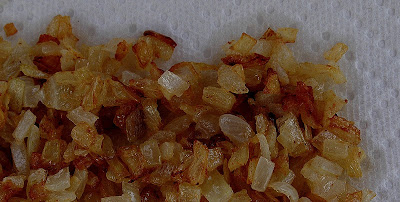 Mix onion with a couple tablespoons of softened cream cheese and about a half an ounce of black truffle, minced finely. 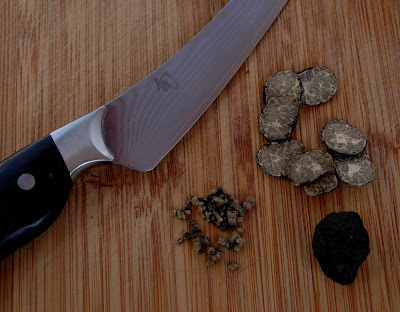 I am using Oregon Black Truffles from Alpine Harvest that I purchased at Whole Foods.
Spread the filling in between the brie pieces, fitting them back together like sandwiches. 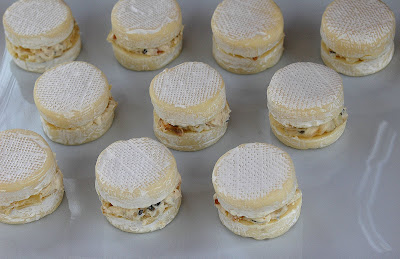 I used about a heaping teaspoon of pastry on each piece of brie. This quantity of filling should be adequate for one 5-6 inch brie round or about 9 or 10 small ones like I've made here.

Place each brie on a circle of softened puff pastry, large enough to come up the sides of the brie where it can be pinched to another smaller round of pastry dough placed on top. This creates a 'seam' all around the top edge. I pinched and re-pinched this seam, as I've had it split open in the past. A little beaten raw egg helps it stick together, though too much and it gets slippery and doesn't hold. This time, I also inverted the pastries when baking, tucking the seam somewhat underneath. At this point, you can decorate it with scraps of pastry dough, or leave it plain. Brush all the top areas with beaten egg, being careful not to let egg touch the sides of any cutouts. Egg would 'glue' them tight and prevent them from expanding and puffing as they should. Bake at 425 degrees for 20 minutes or until golden brown. (I usually bake on a Silpat sheet or line the baking sheet with foil for these.) Let sit about 10-15 minutes after removing from oven. Set them out with crackers, toasted baguette pieces, or just by themselves. 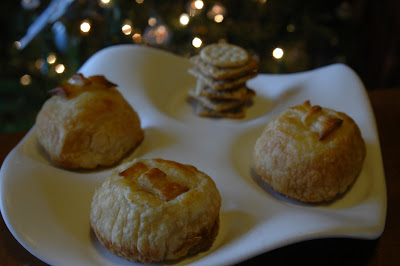 If you serve these at your next dinner party, you're bound to get rave reviews.

You can bank on it!