What????.... Twice in one day?!  I thought since I took a few  months off from blogging (and yes, I DO realize that was right after vowing to make weekly postings, which was right after taking almost a year off....) I thought it was fitting to turn in some extra credit homework.  It's not that I did nothing for the past few months.  On the contrary, I start many things and have a whole host of unfinished projects to show for it!  But in the midst of those are actually a few finshed things.  Hard to believe!

I decided if I was ever going to 'be an artist when I grew up', first I need to grow up, and secondly, I need to do art!  For years, I've been turning out only one or two pieces a year, which is really unacceptable.  So, sometime in February, I decided to get serious.  I layed out an outline of several juried exhibits and competitions I wanted to enter, and came up with a series of deadlines.  That is the kind of catalyst I usually need to get working.

First, I finally got around to drawing the Texas Longhorn hand gesture I'd been talking about doing for over a year.  I'm going to make prints of it soon, that will be for sale. 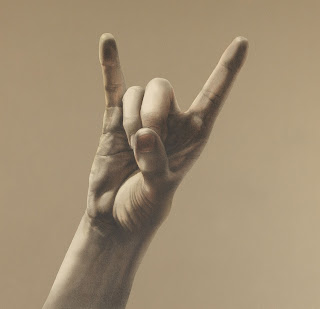 This hand gesture piece is titled 'The Fan', measures 10x10, and is a combination of graphite, watercolor and acrylic.  (To satisfy the 'Other Fans' around where I live, I'll also be doing the Texas A&M 'gig 'em' gesture soon.)

Then I made the following 'popcorn' piece and donated it to the Tulsa Artists Coalition Gallery for their annual 5x5 show and fundraiser sale. 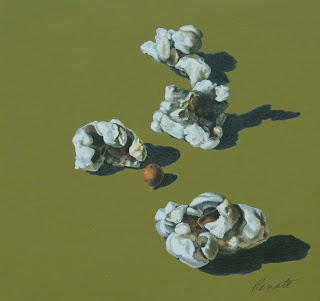 This piece quickly sold at the TAC event.  All works are priced at $55, so some of them are real bargains, depending on what artist painted them.

I was on a roll, and by March, already having two pieces under my belt, finished another 5x5 piece.  I had originally thought of sending this one to the Tulsa gallery, but once it was completed, I sold it almost immediately. 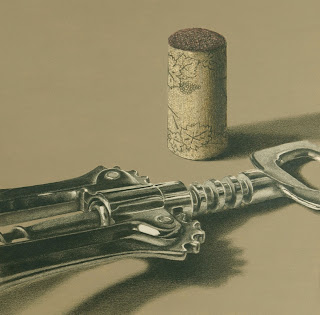 The piece is titled 'Happy Hour', measures 5"x5", and is also a combination of graphite, watercolor and acrylic, as is the popcorn piece above.

In April, I decided it was time to work on a piece I've been kicking around in my mind for a few years.  I ultimately want to do a set of three pieces, and this is going to be Part 3, which will hang below two other pieces that are all hung vertically in a row.  The set is titled 'Rapunzel Had a Better Idea'. 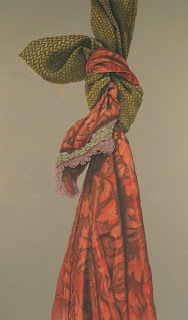 Again, the same three media are used here.  The size of the image area (excluding mat and frame) is 10"x20".

And finally, the piece finished most recently is titled, 'The Standoff'.  I'm hoping to have shown an basic array of symbolism without taking an obvious position on 'left' or 'right'.  Hopefully it will spark conversation amongst the viewing audience.

Now- on to another piece I have been mulling over in my head for awhile, again involving a lot of hand gestures!  So I best get at it.
Bye Bye!

Over the years I have started many projects that I never finished.  If you find that hard to believe, then you don't know me at ALL!  In fact, I probably haven't finished most projects I've started.  It's laughable that I still hold out hope for some of them, which have been tucked away for so many years that the style or fad has long since passed and they will looked far too dated to be worn or displayed.  I am not deterred by that!  I'm sure the trend will circle back around eventually, and I'll be right on time.... next time!

But in the last couple of years, I've gotten better.  (Cue the drum roll!)  So without further adieu, here's the finished market bag! 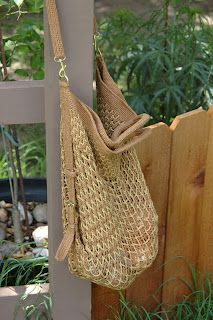 There is only one loose end, and that is to find better clips to attach the strap to the bag.  These clips are only brass plated, and I'd prefer solid brass.  The Tandy Leather store was out of them at the time, so I'll check again, or possibly find them online.  I will replace these with ones that don't swivel, as that will help keep the strap from twisting.

Originally I had a very rippled lower edge to the bag (you may recall the image in my last post), so I found a small leather belt at Goodwill and cut it to fit across the bottom edge.  It's held in place with some wide, crocheted 'belt loops' for removal of the belt if I launder the bag.  Here's the bag turned inside-out: 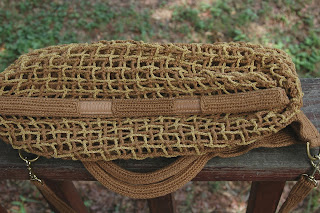 The side strips were hand-sewn in place, and buckles were attached.  (Those are solid brass.)  I used crocheted loops as well as leather ones that came on the purchased belt.  Here's a side view: 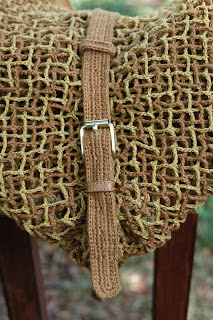 I made the side strap long enough to wrap around the inside of the bag, enclosing the solid brass D-ring at the top.  Those are all hand-sewn in place. 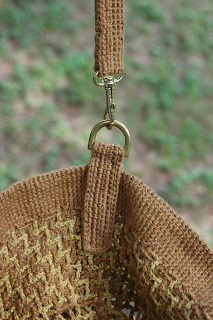 I ended up doubling the long strap, as it was twisting too badly with just one layer.  Again with the hand-sewing!  I put the two strap layers back to back and sewed with matching thread all along both edges.

Finally, I didn't like how the single-layer handles were looking so misshapen, so I crocheted matching shaped oval/circles to act as 'facings' on the back sides of the handles.  Once matched up, I stitched the facings around the inner rim, then placed a piece of thick piping around, and sewed the outside edge shut.  That made the handles nice and plump, and they keep their shape fairly well, even with a bit of weight in the bag. 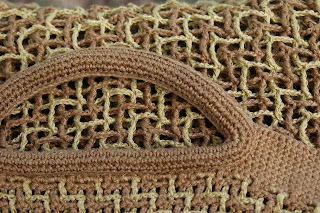 All in all, I'm super-pleased with the results and am looking forward to going shopping with it!  It feels really good to be able to cross a task off my 'To Do List', which doesn't happen very often! 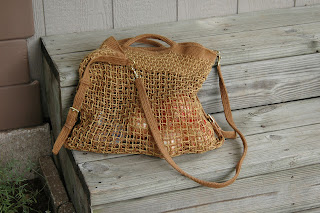