A week ago Sunday, I was jarred out of my interior design trance ('oooh, I want one of THESE in my newly remodeled kitchen', and 'I hate this house, I hate this house') by a frantic knock on the door and a man yelling 'Everybody get out!!!! You gotta leave now, mandatory evacuation order RIGHT NOW!!! Drive out Cardinal and turn left on 21 as fast as you can, NOW, NOW, NOW!!!'

Well, heck, I was just settling in with some hand drawn house plans, a great cup of French Press coffee, and some fresh fruit... and now I have to hustle? That's not what Sunday mornings are all about!

So when I looked out our front window, this is the view I saw: 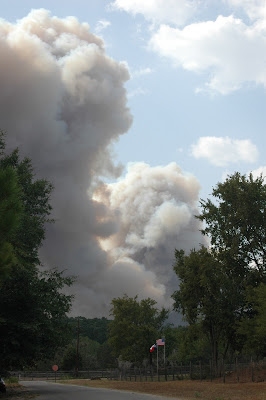 We decided to ignore the evac order and stay as long as possible, knowing our way out (through a neighbor's pasture) would come in handy since we were at the very back of a long dead end road.  We packed our cars full of pet carriers and belonging and carted them to the parents' house on the other side of the property.  The sky turned to this: 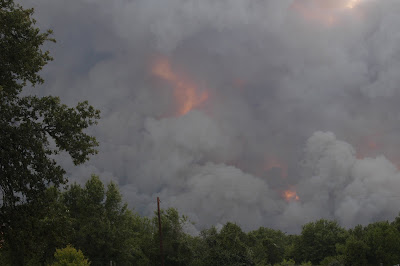 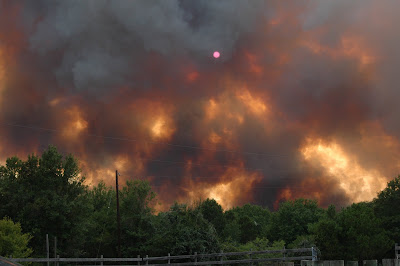 We got the majority of our favorite things transferred, and begun to hose down our property, the roof of our house and shed, and filled 55 gallon barrels with water to tip over at the last minute if necessary.  The strong winds were in our favor, blowing the fire to the west of us all through the day, night, and the following day.  This was the view of my father-in-law's windmill during the first night of the fire: 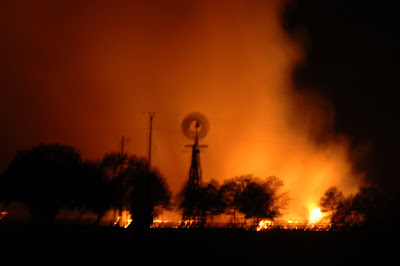 I have no photographs from  ﻿Day 2.  At some point, I just had to put down the camera and get to work.  We were fighting off the fire around the perimeter of our property.  My father-in-law filled a tank of water on his tractor and he and my husband went around spraying fires in the back woods.  By early evening, the fire had encircled our neighbor's property directly behind us.  They breed and raise chickens and birds of all kinds.  We knew they had evacuated, so we felt we had to open all the cages so the birds didn't all fry in their pens.  As we did so, the fire had engulfed a couple of their sheds and was closing off the lane at the curve.  This was our way out, so we had to hustle.  My husband and his father worked through the night with the tractor and water tank.  By noon the next day, most of the fires they could see were under control, but they weren't aware of another nasty fire creeping closer to our other neighbor's house.  All of a sudden, it started exploding repeatedly.  Some other neighbors had just snuck back home via the secret back entrance, so they came running.  All of us were out there with garden hoses, which felt like little squirt guns aimed at such a big fire.  Right then, when it looked like this had gotten bigger than we could manage, the cavalry arrived.  Several fire trucks came down our culdesac.  Even THEY had to call in more help.  The next thing we knew, these angels from Heaven were coming to our aid: 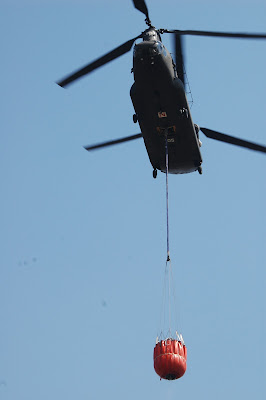 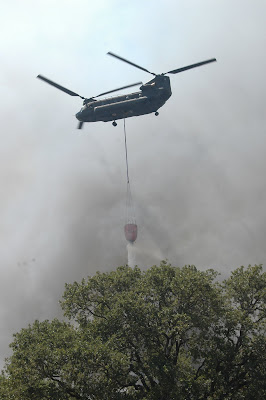 These Chinooks were scooping water from my father-in-law's pond to dump on our neighbor's home.  Then  they left and Blackhawks took their place and continued scooping and dumping.  It was very noisy and exciting on our street! 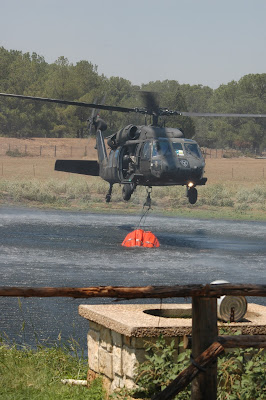 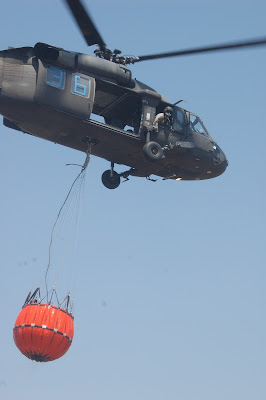 FINALLY, the worst of the fires were over in our area.  Latest word (as of 9-13) is that the fire is only 60% contained as a whole.  But since we were at the 'beginning' end of it, the areas still burning are more downwind of us.

Our neighbors had set up a temporary animal rescue operation, since their daughter-in-law was a vet.  She was able to take in hurt, displaced, or scared animals and stabilize them, soothe them, feed them, whatever was necessary, while matching them up with their owners.  I believe it was also coordinated and approved by FEMA, so they had ways to monitor where animals were, who they were to be turned over to, etc.  One particularly sad pony came through who's owner had obviously neglected him and failed to keep his hooves trimmed.  This sweet little guy hobbled along much slower than the other ponies they found in his same group. 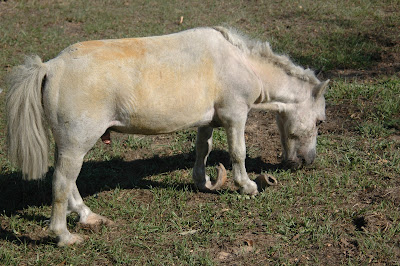 The yellowed hair on his back is where he got singed. 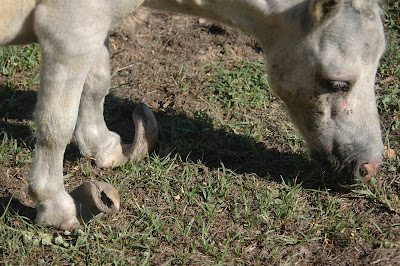 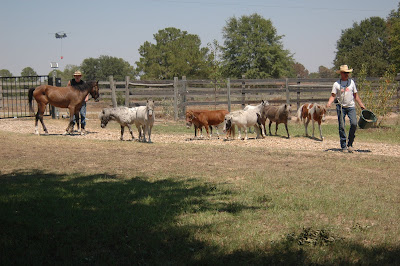 And more animal news... many of the chickens/guineas/swans, etc. that we turned loose have stayed around their home, and with much effort, we stopped the fires from finishing off the place.  I have gone there twice daily to refill food and water.  We managed to catch quite a few chicken and relocate them to our large pen until the owners can come back to their house.  We will help them catch the rest of the birds as best we can and get them in their repective pens. 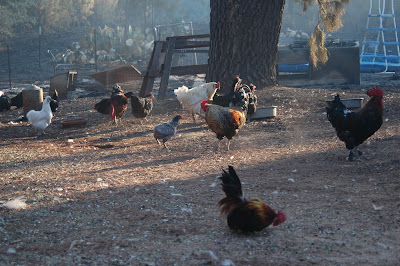 I keep having to chase their guinea hens home.  They are quite comical! 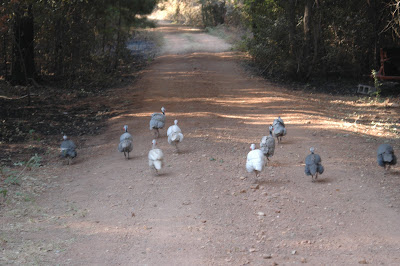 A stray horse was found: 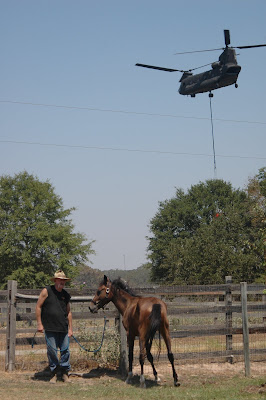 I took a drive through our neighborhood.  Where there used to be hundreds of homes up and down our street to the west, now there are maybe 6!  Our little cluster of neighbors fared well, for the most part. That's may be due to the fact that we stayed and fought the fire and didn't let the back-burning creep too far in our direction.  Well, two of our immediate neighbors lost homes, unfortunately.  We had no idea when our new neighbor Robert's place burned down.  We were likely working on the other side of the farm when that happened.  He had just moved in and we really hadn't gotten to know him yet, but now, through this ordeal, we are very glad he will rebuild and join our community.  We also learned what most of our other neighbors are made of.  We love our little neighborhood family!  Now, here are some sad pictures of the homes on down the street, of neighbors we didn't know. 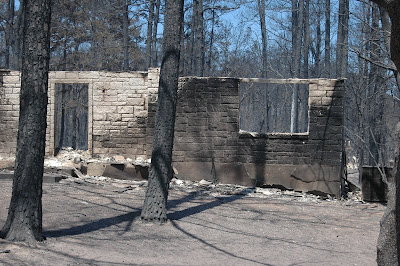 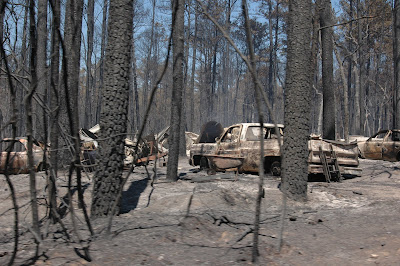 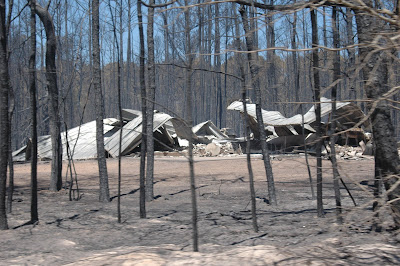 And this is (WAS) our neighbor's house: 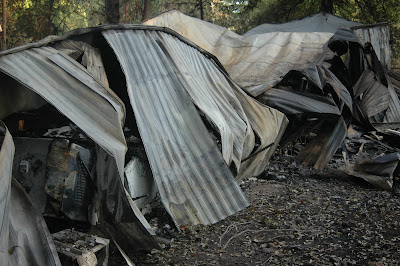 Now the bulldozing and cleanup begins: 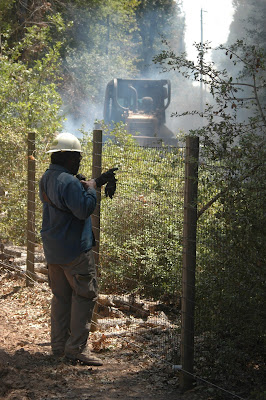 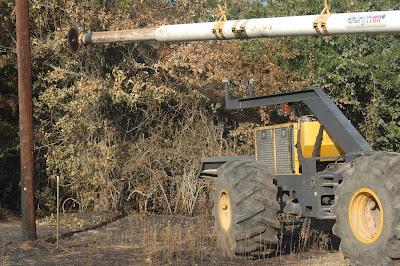 We have adopted this little sweet kitten who's owner has not come home for days and his house is all burned up.  He and his brother are safe and sound at our house.  We have named them Ashley and Agent Smolder. 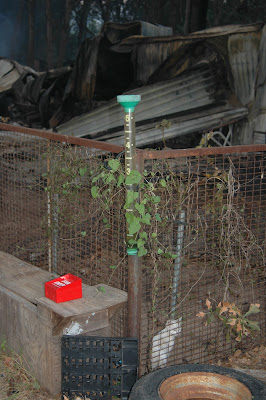 You can barely see the kitten hiding in the lower part of the picture.  This next picture is what is left of his owner's yard and workshop: 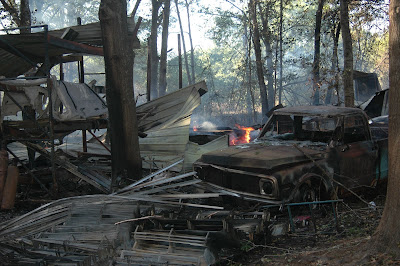 Now that this disastrous ordeal is mostly over for us, I am so much more thankful for the house I originally hated.  I am in less of a hurry to demolish it and rebuild another one, and I am grateful for blessings everyday!