I just discovered that creativity has a melting point! When it reaches a hundred degrees, it starts dripping and oozing, and once it leaks out, you can't possibly put it back in before it evaporates! I'm pretty sure that's what has happened to me this summer. It's been consistently a hundred degrees (or more) for something like 70 consecutive days in a row now!

I'm probably just using this as an excuse for my poor progress on several outdoor projects.

Finish the electrical wiring in the shed

And oh, don't even ask me about the state of what used to be my garden!

Now, first of all, tell me..... do any of those projects sound creative? Barely, right? That factor, in and of itself, is enough to make me disinterested. And since those projects are out of the question, anyway, at these temperatures, I've resorted to participating in a few indoor sports, like cooking, sewing, and jewelry making... things with a higher degree of creative involvement. That's assuming, of course, that I have any unevaporated creativity left.

Lately I finished a tedious little beading project that I entered in a contest. What appears at first glance to be a twist of many strands of beads is actually many separate beaded circles intertwined to create a chain. Each circle is finished off independently from the rest, allowing a fluidity and slinkiness to the piece that is very chain-line. 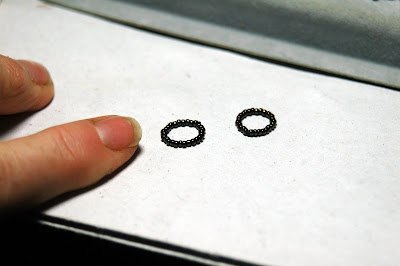 I first started playing around with circles of beads, tying each one off with three or four knots, then working the two tails of thread back through the circle of beads in opposite directions, creating a clean beaded circular 'link'. 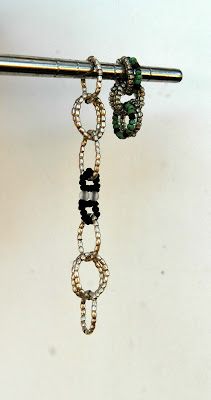 After linking up a few circles in a simple chain pattern, I knew I could improve on the look by complicating it MUCH more than that! So I doubled up some of the links. 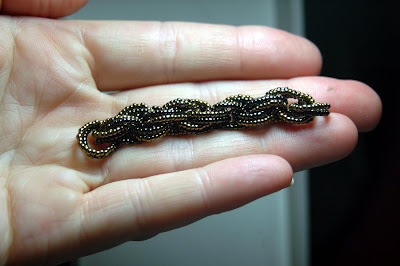 That still wasn't complicated enough. With a double set of circles in each link section, I entertwined them to create a spiral by having each link pass through four previous links (two sets), as they are attached. Then the next links also are added through, ending up with each link connecting through eight others. I love how it closes up the space between the links and produces a solid snake-like effect. 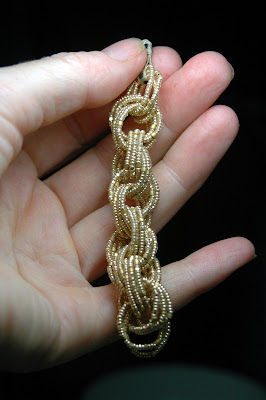 Pictured above is a section done in a lighter gold Charlotte bead, with an occasional 22k matte gold Delica bead thrown in. Each set of links in this piece is done in triplicate. This definitely isn't for the impatient to attempt! I'm unsure how to incorporate this bulkier section into a necklace exactly. I would like to add other strands of beads and include chain, dangling charms, etc., resulting in quite a complex piece. It's a work in progress and I'm confident it will evolve in the right way if I don't rush it. Here are a few monochromatic materials I've rounded up to possibly work with. 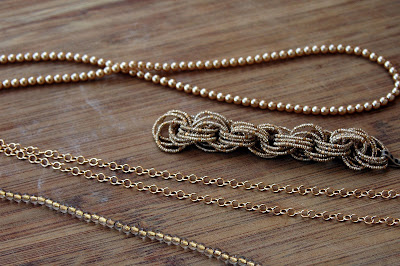 But back to the contest entry. I finally made a section of links long enough to work into a bracelet, and then made matching earrings. This last photo shows what I entered into the contest, and I will find out at the end of the week how it fared. 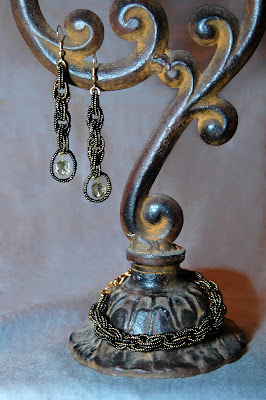