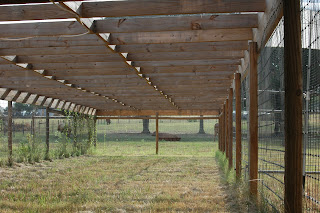 We have quite a large pen for our chickens to run around in.  It's the next best thing to being able to free-range, but they are better protected from the hawks, owls, coyotes, our herd of cats, and our neighbor's 2 Great Pyrenees dogs.  The basic structure measures 16' wide and about 75 feet long, with a height of about 6', so I can just barely walk upright without bumping my head.  At the moment, we have 13 chickens, so there is plenty of room for expansion of the flock.  The perimeter started out with horse fencing completely enclosing it, and the roof is covered with 1/2" hardware cloth.  But I realized I needed to make some modifications. 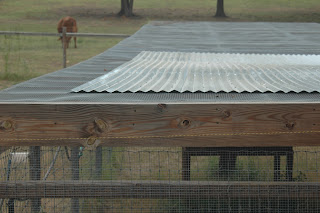 First, I added some corrugated panels on the roof so the chickens have some shade from the harsh Texas sun.  This picture shows it unfinished though.  It is deceiving, but the panels go one third of the way down the length of the run, and it has since been covered the rest of the way to the left side and along the near edge. 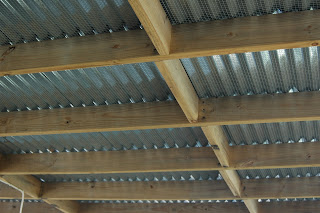 Here is the roof from the inside.  I didn't bother to take off the hardware cloth.  I started to, and after spending 20 minutes on one small section, I decided those staples were going to stay in place! 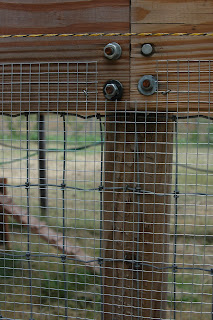 The size of the horse fencing around the perimeter proved to be too large for the best security, so I started covering it with more hardware cloth.  Sheesh, that ran into some money!  But since we do have a snake problem, it seemed necessary. 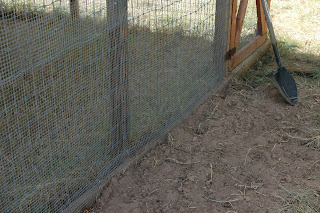 It was also important to fortify the bottom of the fencing better by going down into the ground
about 10 inches and burying the bottom piece of hardware cloth in an 'L' shape, to deter any
digging predators there might be. 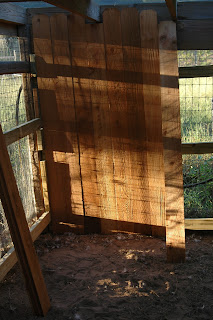 Now for the accommodations.  I decided not to build a completely enclosed coop, but rather just to shield a corner from the elements by tacking up some cedar fence boards. 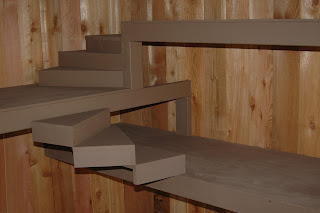 Then I built three levels, connected by a circular stairway. 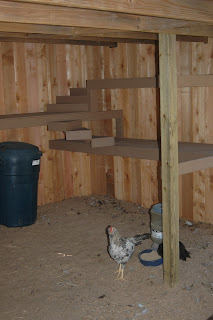 Even as it is, I'm pleased with the shelter it provides, but ultimately I plan to close in the two short sides, build some cubicles on a couple of the levels, and then install some cute cosmetic touches.  The weather has turned rainy and colder, and combined with the holidays, this project is on the back burner.  But the chickens seem to like it just as it is.
Posted by R. S. Kasper at 6:22 PM No comments: Links to this post