It's been awhile since I posted a 'recipe'.  I put quotes on the word 'recipe' because this is one of those anything-goes kind of dishes.  Be encouraged to rummage through your crisper and work with what you have.

I have often wanted to make something on the order of a cole slaw, but didn't have any cabbage.  I used to think cole slaw had to be the light green and white stuff, dotted with carrot shreds, coated in a slick white dressing.  Once in awhile, a poppy seed would make its way into the mix, but that's about as creative as it got.  Then I discovered what an improvement it was to add a few sunflower seeds!  Whoa.... game changer!

So now, when I have a hankerin' for cole slaw, I have ventured so far outside of the boundaries of the traditional cole slaw recipe, that it doesn't really matter what I put in it, as long as the dressing is right.  Today's version started with a little bit of purple cabbage, just because I had some on hand, mostly to add a touch of color to salads or tacos.  I also had half a head of cauliflower.  (Broccoli would've worked well too.)  I love minced onion in my slaw, so in it goes!  Shreds of carrot, yep!  And then I pulled out whatever else I had in the crisper..... celery, parsley, cilantro, and..... (drum roll, please!).....  NECTARINES!  Most any fruit will work well in a slaw.  I've often included diced apple or pear, but crushed pineapple is also really nice.  Even blueberries or raisins make a great addition.  The point is, something sweet should be considered.  Now, if you added little marshmallows and nuts, you're getting close to a Waldorf salad, right?

So, go ahead and chop yourself a big bowl of random produce like this: Now let's discuss the dressing.  Even THAT has gotten a makeover.  Remember when it was mostly mayo, with a little vinegar and maybe some sugar or agave?  Well, try a splash of pure sesame oil!  And maybe use honey instead of sugar, and... WHOA.... what have we here? 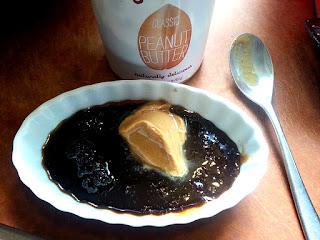 I added a spoonful of peanut butter to some honey that had gotten dark and sugary.  It's still plenty good.  It just needs a little heating to dissolve the sugar grit, and that will also soften the peanut butter so it blends well into the rest.  Today, I used Vegenaise, a little balsamic, a few drops of sesame oil, a splash of milk, a drizzle of olive oil, and this honey/peanut butter blend.  YES! 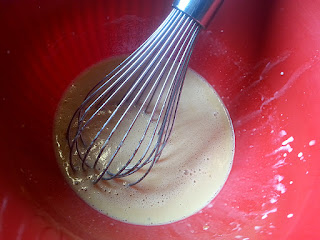 I taste the dressing and check for basic flavor, but I don't add the salt until I've dressed all the veggies. Then I salt it a bit, stir and taste, maybe salt some more, and check again.  It's a horrible thing to over-salt it, but some salt is a must!

Here's today's outcome- much different than the average cole slaw, but OH so tasty!  I think I'll still add some sunflower seeds, or black sesame seeds.... or BOTH! Next time, it probably won't look anything like this.  It might have summer squash, or cucumber, or grapes!  You just never know, but it'll certainly taste awesome!  What unusual things do you add to cole slaw?  I'm curious to push the boundaries even farther.

I'll be posting about something crafty soon.  I'm dabbling with bead-weaving lately.  It's tedious, and a change of pace from the other beading I'd been doing.  See you soon!

The night of my Best-of-Show win at the RCAS art exhibit, I was asked to return in a few weeks for a presentation of my art to the community dignitaries and library staff, where the piece will be placed on permanent display.   So that event was held last week at the Richardson, Texas Civic Center offices.  I made a fun weekend out of it first, staying with a good friend and shopping quite a bit.  But, not to digress, the art event was the main reason I was there.  It turned out being a very quick presentation where I held the framed artwork, stood next to the Richardson mayor, Paul Voelker, and several others involved in the process.  Cameras flashed a few times, and we were done!  Once everyone arrived, it took exactly NINE minutes! 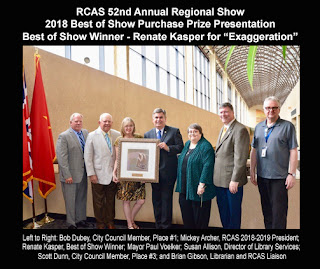 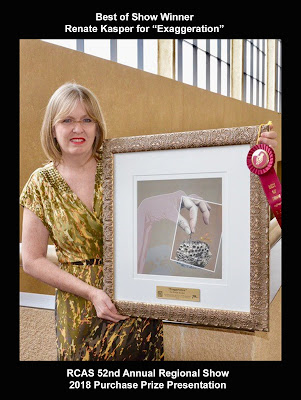 But it was a pleasure to conclude this honorable follow-up to the RCAS annual exhibit, a show where only artists residing in Texas are eligible.  I look forward to entering next year!

I've been asked several times to explain the meaning of the title, 'Exaggeration'.  I purposely used subtly contrasted paint values to include a shadow in the lower part of the art.  If the hand, wasps' nest, and wasp were to cast a shadow, sometimes those shapes are abstracted in unnatural ways.  In this case, I further changed it so that the wasp created the shadow of a fire-breathing dragon. 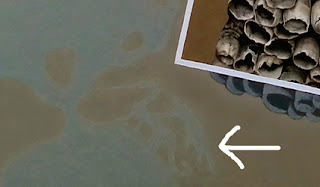 When I have loose ends like this event, waiting to happen, I always find it hard to immerse myself in another project.  But now that this has concluded and can be checked off, I will settle back into the next item on the list.
Posted by R. S. Kasper at 11:37 AM No comments: Links to this post