Of course, I can't stop beading. It's like breathing, anymore. But it's been a busy week in other ways. I've been interviewing for a job, first by phone, then a one-way recorded interview with a platform called Spark Hire, and finally, an in-person chat, and then... I got the job! (Once I'm sure I've passed orientation next week, I'll share more on that later.) But in between writing a resume (I hadn't needed one of those in years) and the recent drug test (ditto!), I have managed to knock out a few "halves" of bracelets.

You see, when I make Double Reversible Bracelets, I finish the first pass all the way down the bracelet, to set its size and overall structure, by making the equivalent of an 8-strand bracelet. The size sometimes can't be controlled on the first draft of a bracelet. Each one I make is different, and when I start creating repeats, the whole thing needs to end at a pattern break, so that the pattern repeats are whole. I can stop after any pattern sequence I want, so if I don't feel that the bracelet will be quite long enough, I need to add a whole additional pattern, or "medallion", as I sometimes call it. Now, when I have to attempt a custom-sized bracelet to fulfill a request, based on one I already made, I can plan in a tiny sequence between each repeated design (if the bracelet needs to be larger), or remove some element in each pattern (if the new bracelet is going to be smaller). But it's not always the easiest thing to do, sizing something with accuracy. That's why I really like to make bracelets that don't have to be any particular size. I usually shoot for something that would fit my own wrist, in the event that I decide to keep it, or if it doesn't ultimately sell. But it's a good idea to have extra large or extra small ones for those occasional hard-to-fit customers. So here are the four bracelets where I left off, in their half-finished state. 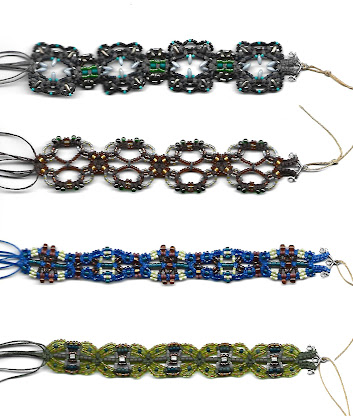 It's always easiest when I leave 'holes' in the beading, so that the next pass has room for bead strands to weave in and out. Some of these patterns don't leave much room for that, so the end result will be quite tight. But that's sometimes a nice effect. I'll tie off the end strings to another sterling silver bracket before I start with the next pass. That one will be the equivalent of a 12-strand bracelet. If you look closely at the silver brackets at the right end of each bracelet, you'll see 3 holes or loops in each of them. Each loop will be an attachment point for a 4-strand row, but those strands will separate and shoot through whatever hole might allow it to cut through to the other side. Knots will hold the strands on one side, then some or all of the strands will work their way to the other side, where they are knotted again. The decisions of how these pieces proceed aren't made ahead of time. It's an organic process, and I usually go with how the bracelet 'wants to be made'.
When I hear people say something like that about their artwork, I always roll my eyes. In my art-making decisions, I take full responsibility, and I know well in advance what I'll be doing, so I find it hard to understand how someone might not know those things. How can you know when you're done, if you are groping your way along? It seems so willy-nilly. But, those feelings are probably something of a double standard, given that I stumble along an unclear path while beading. But as soon as I get to the end of the first repeat, the details are set for that layer, and I usually don't have anymore decisions to make about the bracelet for awhile.
When I get these bracelets finished, I'll show them to you again. I will scan both sides, as they can differ greatly from this stage. That's what makes them reversible. In the mean time, here are some finished Double Reversible Bracelets, with both sides showing for each one. 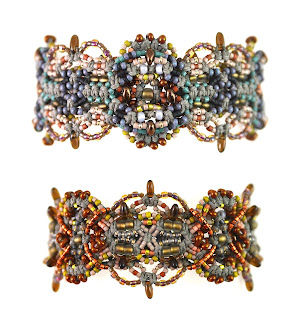 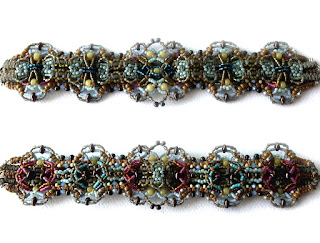 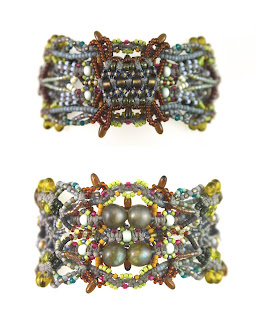 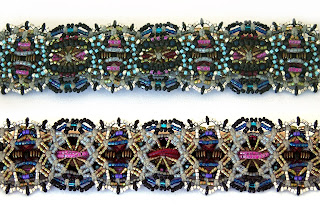 "Geo-Marca"
When both layers are interwoven, it becomes very difficult to differentiate which layer is which. That makes it even harder to repeat a bracelet, which is why I started scanning them at the end of the first stage. If that part is not repeated in some similar manner, there's no chance in getting a match on the bracelet. I always make a few changes, but the overall look can be repeated somewhat, in a new size, or with slightly different colors. (I take my "one-of-a-kind" claim seriously!) So check back next time, and you'll see how those first four bracelets have been transformed with their final additions.
Last time, I mentioned needing a studio, and hoping to come up with some plans in order to build such a structure. I really didn't have time to work up a new plan, but I remembered that I'd spent a lot of time making a studio plan a few years ago. It never got built, but I was really just fiddling around while I was learning the beginnings of AutoCAD. I was intrigued with what I'd previously created, but it isn't entirely practical at this point, now having moved to new circumstances. This version has a main level, and a stairway which leads to a loft that only covers about a third of the whole layout. 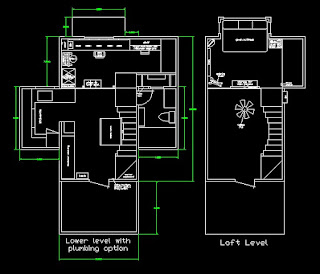 I don't foresee needing a sleeping space in my next studio plan, so this loft is probably a little unreasonable. Likewise with the small kitchen and bathroom, which even includes a tub. I could see having a toilet and just a utility sink for cleaning paint brushes and such. I have been ever so enamored with a cantilevered room though. Do you see how the loft bed sticks out past the wall at the top? That is the cantilevered part, which would hang out from the structure, seemingly unsupported. The trick is to have the floor joists running far enough into the room, well-anchored in several places. A wide board is necessary for that, like a 2x10? Maybe 2x8? (I'd consult a builder before making that kind of decision.) This plan only extends three feet, so that isn't all that risky. If I ever get the chance to design my own dream house, I would love to include a cantilever feature, but I have a feeling this particular plan may not be quite the right solution for my current studio needs. I still intend to work on a new layout for a more reasonable shed. I have plenty of time, since we are currently in the middle of a severe freeze, with lots of snow in the forecast. Ain't nobody gonna be building anything for awhile.
I'm having serious MCD symptoms today, and I think I will need to take something for it. Rather, I will need to make something for it! (LOL! Don't worry, it's just my 'multiple creativity disorder' flaring up.)! I'm thinking I'll find a temporary remedy in turning out some kind of Valentine dessert or decorated cookie tomorrow.  I'll be sure to report that to you, if it happens. (Sometimes I'm all talk!)
See ya soon!
Posted by R. S. Kasper at 9:19 PM